Birth of the Colombo Interact Club – 50 Years Ago!

This was Sri Lanka in 1971, the year that the Interact of Colombo was formed on September 7th.

In 1971 it was the violent insurrection of the JVP that sent the country into a tailspin. The perceived enemy – disgruntled youth in rural areas –were not an invisible threat. It was very different to Covid-19 virus, that does not appear to discriminate between rural-folk and suburbanites. In 1971, it was the great leadership of Sri Lanka’s then Prime Minister, the Late Hon. Sirimavo Bandaranaike and her SLFP government, ably supported by very many intellectuals in the opposition UNP party, that reasonably protected Colombo - supported only by a very inexperienced Army and Police.

In fact, having visited Cambodia recently, the story could have been very different had Colombo not been protected from a rampaging JVP.

Similar to life in Colombo in the 1970s, the residents of Cambodia’s capital city, Phnom Penh, were enjoying a very western lifestyle when Pol Pot’s Khmer Rouge overran the city in just one day – on April 17, 1975.  This ultimately led to an estimated 1.5 to 2 million Cambodians dying of starvation, execution, disease, or overwork. If you were identified as an intellectual­- this meant even schoolteachers and those wearing spectacles - you were at best put into rice fields, and at worst, shot.

Thus, the youth of Colombo owe agreat debt of gratitude to the strong leadership displayed by those in power at that time in Sri Lanka; that enabled them to continue to function at some degree of normalcy in their daily lives.

I was very much one of this somewhat privileged Colombo youth group, when I heeded a call from famed Architect the Late Mr. Justin Samarasekera, the Chair of the Youth Services Committee of the Rotaract Club of Colombo, to form the Interact Club of Colombo. It was the first such club in the world to be formed that was not linked to any school. He wanted the youth of Colombo, especially those from privileged schools, to reach out and bridge the gap that had opened up between the city and rural youth.

In 1970, just a year before the JVP insurrection, I was a member of the Interact Club of Royal College, under the Presidency of Mohan Kumaraswarmy. He had asked me, along with my cousin Kavan Ratnatunga, to organise Sri Lanka’s first “Discotheque”. It was a roaring success, and the profits, Rs. 5,500, went to build a School in a Veddha village in Batticaloa and also appoint a teacher. (I am told that later, the area was overrun by the LTTE, and the jungle school became a makeshift barrack for them). However, at that time, we had no inkling that trouble was brewing in the rural areas and that the JVP was rising.

By early 1971, we were very much aware of the potential trouble, but not the scale. Curfews were imposed, school sports fixtures disrupted, and exams postponed. The Bradby shield rugby match was reduced to one leg in Colombo; and even then, we were unsure if the Trinitians will arrive safely. Their Team Bus was given a military escort from Kandy to Colombo. However, life in Colombo continued. “Curfew parties” were held from dusk to dawn; and ‘Beat Shows” and other events were held in the afternoons, in the blazing sun.

Against this backdrop, the Interact Club of Colombo was formed, with me as its first President. Several my school mates from the Royal College Interact Club also joined, as did those introduced by the Rotarians from other Colombo boys’ schools such as St. Thomas, St. Peters, St. Josephs, Zahira, and Wesley. Most interesting for us, coming from boys-only schools, members were also drawn from leading girls’ schools, such as Visakha, Ladies, Methodists, Bishops and HFC.

The Inaugural Members in 1971 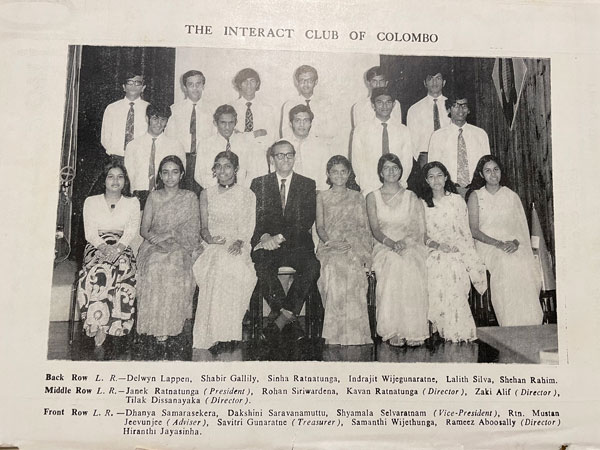 Looking back, what was really interesting was the rich diversity of the cultural backgrounds of the members. Surnames such as Wijegunaratne, Saravanamuttu and Selvaratnam were interspaced between Jeevunjee, Aboosally, Lappen, Alif and Watson. There was Ambani, Ambrose, Dawoodbhoy sitting beside Rasquinho, Rode and Yu.

There was no community one-upmanship. At that time, ‘pirith-nool’ were worn only for a week or so after a religious event. The Sanath Jayasuriya style of an armful of multi-coloured pirith-nool was a thing of the future. The pottu, was as it should be, just a ‘dot’ - and not a disk covering the entire forehead. A small crucifix was worn inside clothing and had not, as yet, grown in size to be displayed externally – that could well give the wearer neck-problems in old-age. The head was covered, if required, by just a saree ‘pota’. Hijabs and Burkas were still to come.

The Interact Club of Colombo’s ‘Business-Model’ was simple. It was to have entertainment events, such as discotheques, beat shows and film shows with a Souvenir attached to each event. The tickets for the event itself was priced at affordable rates - the entrance fee was usually about Rs.5 – with the real money came from selling advertising space in the Souvenir. All the profits were for Community aid.

I well remember cycling or walking to business establishments to get them to sign-up to space in a “Dummy” souvenir, which was priced according to a back-cover, full-page, half-page, inside cover, etc. It was good that the decision makers were somehow connected to our members or to Rotarians.

The souvenirs were all printed by Jaya Balasooriya of General Printing Works, down Union Place. Some advertisements required a ‘block’ to be made of cast-iron. Jaya’s staff developed the pages letter-by-letter. It was hard work.

Looking at these souvenirs now, one can get quite nostalgic for times of yore. There are advertisements from companies that are still around; Don Carolis, Browns, Bullion Exchange, Edirisinghe Brothers, Ceylon Brewery, Singer, Lankem, amongst them. There are many others that were household names at the time, that are no more. As a piece of Sri Lankan history, these Souvenirs are invaluable.

The money collected from these events went to do significant community service. The word ‘Interact’ is derived from ‘International Action’. The organisation is dedicated to providing young men and women with opportunities to work together in a world fellowship dedicated to service and understanding. In Sri Lanka, in the wake of the JVP insurrection, this also included connecting with rural youth. A ‘Youth Camp’ organised by Rotarians for rural youth to mingle with Interact club members. The two-days event included visits to the Museum, Zoo, Petroleum Refinery, and Colombo Harbour. Even a sports meet and a staged play was organised. Now this may sound totally inadequate in terms of the problems that the country was facing; but in reality, strong links were formed, and correspondence continued (in Sinhalese) for many years.

Many other community projects were also undertaken. Blood Donations;a Christmas party at St Theresa’s Church; cleaning up campaigns at orphanages, cemeteries, and hospitals; a stall at the Mahajana Pola in Buller’s Road to sell produce contributed by well-wishers; and a door-to-door collections of old clothes to give the needy for the Maha Bodhi Society. I remember walking into “Woodlands” the townhouse of former Prime Minister Hon. Dudley Senanayake with the club secretary Shereen Hewavissa. There was no security, despite the JVP threat. ‘Dudley’ as he was fondly called by everyone, was reading the Sunday Newspaper, and when we told him what we needed, promptly found some old clothes, and donated them.

Today, 50-years later, a number of Interact club members have risen to the highest positions in academia, the professions, business enterprises and journalism. Some are running companies that are household names such as Mobitel, Metropolitan and Stassens. Many of the “girls” have gone to university and/or have qualified in the professions; and have held senior appointments in international agencies. Others are running successful enterprises of their own. For example, Dhanya Wijesuriya (nee Samarasekera) - who took over the presidency from me - runs both a successful transport company and helps her husband Dr Mahen to run the Diabetes Association of Sri Lanka. Many former members remain good friends and meet regularly.

I would venture to say that some of the camaraderie, organisation skills and sense of community that Interact taught them has held them in good stead in life’s journey. I know it has for me. 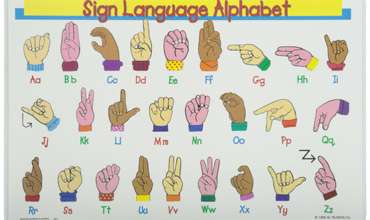 Living In the intersections of disability and gender: International Day of sign Languages 2021 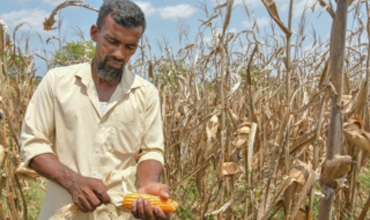 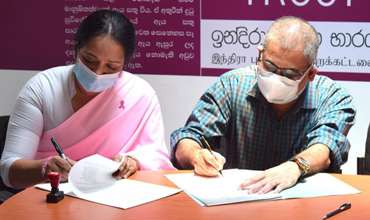 Schools should reopen at the first opportunity, but with reduced examination pressures, EFSL says 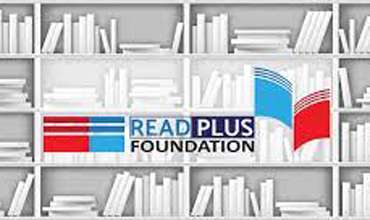