The French Development Agency (AFD) signed a grant agreement worth 1 million euros with the Sri Lanka Tea Board (SLTB) and French Agricultural Research Centre for Development (CIRAD) towards the development of a Geographical Indication (GI) for Ceylon Tea, Ministry of Plantation said.

The agreement was signed by AFD Country Director and SLTB Chairman in the presence of Hon. Minister of Plantation and HE. Ambassador of France. The creation of a GI for Ceylon tea will aim at promoting quality products, protecting traditional know-how it is based upon, enhancing its commercial value and recognition in international markets.

Sri Lanka's tea sector dates back more than 150 years and is the second highest net foreign exchange earner of the country. ‘Ceylon Tea’, identified by the Lion Logo exhibits unique qualities with a range of flavours and aroma. The geographical aspects and conditions of each of the seven tea-producing regions have significant influences on the characteristics of teas they produce. Despite its uniqueness, ‘Ceylon Tea’ does not have protection to uphold and to authenticate the quality reputation of the product. Counterfeit Ceylon tea is sold in various consumer countries.

A Geographical Indication (GI) certification serves to uphold and authenticate the quality, reputation and characteristics of a product by linking them to a specific territory through intellectual property protection, while also giving it added value in national and international markets.

This grant will, over a four-year period, provide technical assistance to establish GI and the relevant certification systems for ‘Ceylon Tea’. It will enable the CIRAD, which has proven experience in the implementation of geographical indications, and the UNIDO (United Nations Industrial Development Organization), which has been working for several years on the establishment of a GI for Ceylon cinnamon, to support SLTB and numerous actors from the tea industry. Through this process, the ‘Ceylon Tea’ value chain is expected to become more productive, inclusive, and sustainable. Ceylon tea will have enhanced value-addition in international markets through intellectual property protections and national and international certifications. 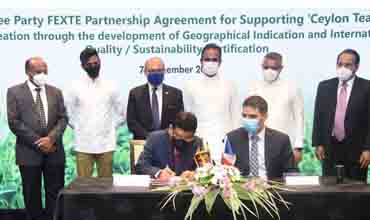