The FMC was jointly launched by visiting Clare O’Neil MP, the Minister for Home Affairs, Australia, and Douglas Devananda MP, Minister of Fisheries, Sri Lanka at an event attended by David Holly, High Commissioner of Australia to Sri Lanka, Sarat Dash, Chief of Mission to IOM Sri Lanka and the Maldives, Secretary to the Ministry of Fisheries, Director General of the Department of Fisheries and Aquatic Resources (DFAR) and other Government representatives, IOM said in a media release.

Under the Sri Lanka VMS project, 4200 multi-day fishing vessels (MFV) are being equipped with VMS transponders which would enable the DFAR to effectively monitor the MFV movements, ensuring compliance with the Indian Ocean Tuna Commission (IOTC) regulations on Illegal, Unreported Unregulated (IUU) fisheries.

The FMC, established under the DFAR, forms the heart of the VMS operations as it will monitor movement of all fishing vessels equipped with VMS transponders in real time. By doing so, the FMC will play a vital role in managing the MFV fleet, both as a diligent regulator, and as a maritime safety mechanism.

The FMC will be the first point of contact in case of a maritime emergency, and therefore is an important lifeline for the seagoing fishing vessels. The geo position information received by the FMC will be vital during maritime search and rescue operations, hence contributing towards improving maritime safety of fisheries communities, the release said.

The FMC will also assist in early identification of illicit fisheries practices and irregular vessel movements associated with transnational organised crime such as drug trafficking and human smuggling, which pose risks to economic and security interests of Sri Lanka and the wider Indian ocean region.

Furthermore, FMC will play an important role in preventing overfishing, promoting ethical fisheries practices, which are critical for sustainable management of the fisheries resources, and ensure that Sri Lanka is an active participant of global efforts to protect marine ecosystems.

Highlighting the longstanding bilateral cooperation between the two countries in the context of maritime safety and security, Minister Clare O’Neil noted, “Fishing vessels should only be used for fishing and not any other activity. Australia and Sri Lanka’s close working relationship means that anyone who attempts to migrate irregularly through boats will be detected and stopped by border authorities”.

From an economic perspective, the fisheries sector plays a vital role in poverty reduction, food security and economic development of the country, contributing to about 1.3 per cent of the country’s GDP, and supporting over 200,000 marine fishing households.

Speaking during the event, Sarat Dash, the chief of Mission to IOM Sri Lanka and the Maldives noted that “the VMS project a vital step towards supporting livelihoods of fisheries communities and sustainable management of marine resources. The ‘blue economy’ will remain a key frontier of engagement for Sri Lanka as the country looks ahead to regenerate its economy beyond the current crisis”. 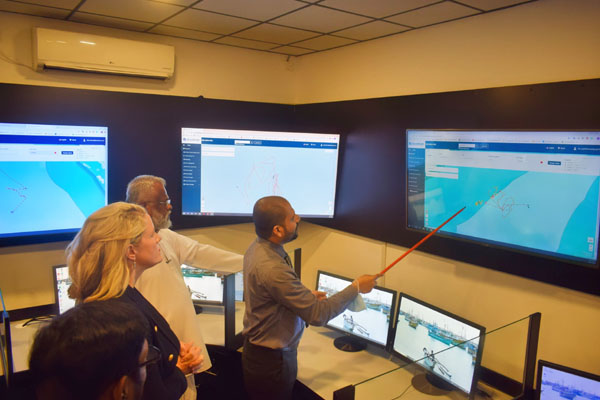 Above - the new monitoring centre,