The construction work of the second phase of Eastern Container Terminal at the Colombo Port commenced this morning (12) under the patronage of President Gotabaya Rajapaksa and Prime Minister Mahinda Rajapaksa.

The President and the Prime Minister unveiled a plaque marking the commencement of construction work at the Terminal.

Construction works of the terminal, which will be conducted in three phases, are scheduled to be completed in 2024. The Terminal which is spread over an area of 75 hectares is 1,320 meters long. Once completed, the Sri Lanka Ports Authority (SLPA) will inherit a fully-fledged Terminal equipped with 12 STC cranes that handle operations from ships to the land and 40 Rail Mounted Gantry (RMG) Cranes. The total expenditure expected to be spent for the project is US$ 510 million and the Ports Authority will spend US$ 200 million.

Addressing the gathering, Prime Minister Mahinda Rajapaksa invited the people not to ponder on the previous two years lost due to the COVID-19 pandemic and keep hopes for the next three years instead. The past has value only to the Opposition. We must always embrace the future, not the past.

The Prime Minister said that no one should give up hopes or optimistic thoughts that they have about the country and that we should embrace the future, leaving the past two years to the critics.

The Port of Colombo is currently ranked 23rd in the world according to the Alphaliner’s Ports Ranking. Minister Rohitha Abeygunawardena said the Port will be ranked 13th after the completion of the new development work.

The event was attended by members of the Maha Sangha, other religious leaders, cabinet and state ministers, governors, ambassadors, parliamentarians, people’s representatives and government officials. 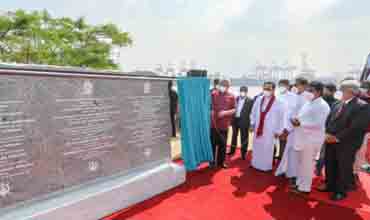