Speaking in parliament last Wednesday, Wickremesinghe declared “there is no reason to end the unity government.” Mahinda Amaraweera, a senior minister and general secretary of the SLFP-led United People’s Freedom Alliance (UPFA), concurred, despite earlier calling on Sirisena to split from the UNP and form a UPFA government.

On Sunday, at Sirisena’s insistence, Wickremesinghe reshuffled the cabinet, altering the role of some UNP ministers. Sirisena later tweeted: “These changes, as well as those to be made of the UPFA side of the government, will strengthen us to better serve the people.”

No one should be hoodwinked by the pretence that the government is stable and serving the people. The ruling coalition was on the point of breaking up before the US and India intervened to demand that the UNP and UPFA maintain the government, which has aligned with Washington against China. 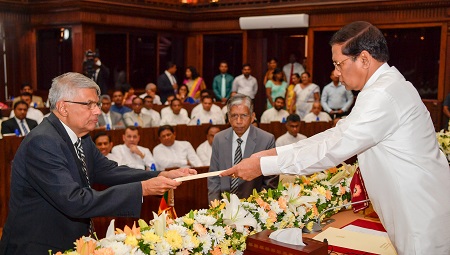 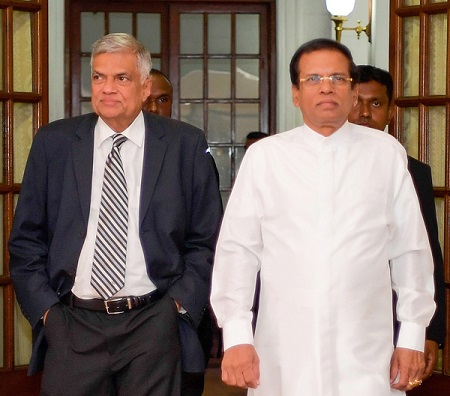 The coalition crisis was triggered by disastrous results in local government elections on February 10, which exposed widespread opposition to the ruling parties. The newly-formed Sri Lanka Podujana Peramuna (SLPP), led by former President Mahinda Rajapakse, won control of the majority of local councils.

The outcome was not a vote of support for Rajapakse, who lost the 2015 presidential election amid intense hostility to his anti-democratic methods of rule and attacks on living conditions. Rather it was a protest vote against the present government’s austerity program dictated by the International Monetary Fund (IMF).

With the government about to collapse, the US and India intervened via their diplomats in Colombo to pressure Sirisena and Wickremesinghe to maintain the coalition government. An Indian Express columnist wrote last Wednesday: “New Delhi is said to be counselling both leaders against any precipitate action,” adding that “the best outcome for India would be if Wickremesinghe and Sirisena patched up.”

The US, backed by India, orchestrated a regime-change operation at the 2015 presidential election to oust Rajapakse and install Sirisena in power. Washington, which is seeking to undermine Chinese influence throughout Asia, was hostile to Rajapakse’s close relations with Beijing and certainly does not want him returning to office.

However, the main concern of the Sri Lankan ruling class is the country’s deepening economic crisis and growing protests and strikes by workers, the rural poor and students. The fear is that the weakened government could prove incapable of implementing the IMF’s austerity agenda and containing social unrest.

Wickremesinghe told a special meeting of UNP leaders on Sunday: “We have to accept the fact that the government’s programs have been rejected by the people.” He was referring to the local government election. Deputy leader Sajith Premadasa declared that the government must implement a “welfare package” in a bid to head off popular hostility.

The government decided last week to lower the price of fertiliser and provide cash directly to farmers to buy it. The finance ministry announced the provision of housing loans at a low interest rate—a measure that will largely benefit the middle class.

These moves, however, are purely cosmetic as the government is confronting a worsening financial crisis. On February 16, Central Bank Governor Indrajit Coomaraswamy called for “political stability as quickly as possible,” warning that the country’s massive loan repayments will continue to rise, even as economic growth slowed to 3.8 percent last year.

Coomaraswamy warned: “If the political situation leads to a loosening of fiscal policy, the Central Bank would have to lean against that and tighten monetary policy”—that is, increase interest rates. He added: “To be frank, there is no scope at all for loosening fiscal policy.”

Significantly, in his cabinet reshuffle, the prime minister took charge of the law and order ministry in the context of demands within the coalition for a crackdown on the Rajapakse grouping. The government has been criticised internally for failing to investigate corruption charges against Rajapakse and his associates, thus facilitating his comeback.

Former army commander Sarath Fonseka, who is already a government minister, was reportedly considered for the post of law and order minister. Although the proposal was dropped, it is a warning that the government is preparing to target, not only political opponents such as Rajapakse, but the working class and youth. General Fonseka was ruthless in the war against the separatist Liberation Tigers of Tamil Eelam that ended with the killing of tens of thousands of civilians.

Purawesi Balaya (Citizen’s Power), an NGO that supported Sirisena’s election, urged the government to appoint Fonseka to the law and order post. After a meeting with Wickremesinghe, Dambara Amila, a Purawesi Balaya leader, said police operations should be allowed to take place outside “democratic norms” with Fonseka in charge.

Purawesi Balaya and pseudo-left Nava Sama Samaja Party leader Wickremabahu Karunaratne have previously attacked protests by workers and students as conspiracies in support of Rajapakse and backed the government’s crackdown on protesters.

Rajapakse and his faction announced they will begin a campaign on March 6 to demand the dissolution of parliament and fresh elections. Following the local election, Rajapakse declared: “There is instability in the country. This cannot be continued. An election must be called and a stable government must be established.” Rajapakse’s call for a “stable government” is nothing but a call for police-state measures against workers and youth.

Both rival factions of the ruling class are committed to implementing the IMF’s dictates and determined to use any means to suppress social unrest.

(This article first appeared in the World Socialist Website)