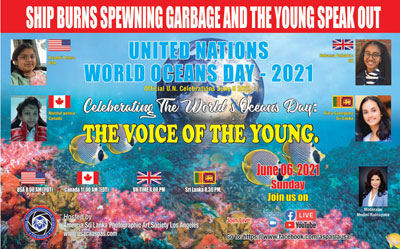 11.00 am. sustainable management of the world's oceans.

The oceans are the lungs of our planet, providing us most of the oxygen we breathe as well as being a major source offood. Their capacity to regulate the global climate, supply essential ecosystem services andprovide sustainable livelihoods and safe recreation are invaluable to the existence of mankind. However, as witnessed by the recent disaster on the beaches of Sri Lanka, the impact of human action on our oceans is taking a negative toll on these large bodies of water and their inhabitants. Against such a milieu the webinar organized by the AMERICA SRI LANKA PHOTOGRAPHIC ART SOCIETY LOS ANGELES (ASPAS) will present the views and suggestions of the next generation on how to save our oceans. The webinar will alsocommemorate World Oceans Day 2021, and celebrate the beauty, the wealth, and the promise of the oceans by reminding us of the major role the oceans have in everyday life.  The children whowill join hands from around the world will voice their concerns and ideas to preserve our oceans for their generation.

Needless to say, as the world population increases, and with it, large scale production processes, oceans have become the garbage dump of mass amounts of pollutants including oil spills, toxic waste dumping, and industrial dumping. These pollutants will have negative impacts on the wildlife in the ocean, as we are seeing already with the Coral Reefs, and soon enough it will begin to affect our lives as well. The chemicals from Industries can quite be harmful depending on what 's flowing into the water. Releasing toxic liquids directly into the water affects marine life and can also change the temperature of the water, known as thermal pollution causing animals and plants that cannot handle that temperature to eventually die. We have to find ways and means of mitigating these destructive practices before we succumb to their effects.

The danger to the entire coastline and surrounding beaches is being well demonstrated before our own eyes by the fire burning in the ship off our coast spawning tons of garbage, plastic material, and dangerous chemicals and gases causing tremendous damage to our pristine coastline, which will adversely affect our recreational areas causing our tourist trade, a primary source of our income.

In addition, shipping traffic is one of the many human activities in the ocean that has a heavy impact on the marine environment. The effects include air pollution, ocean noise, oil spills and spread of invasive species. A recent study found that nitrogen dioxide emissions surged as ship traffic rose along the heavily travelled Red Sea to Asia route and the Asia to Cape Town route, and along the Sri Lanka to Sumatra to China shipping lane, nitrogen dioxide emissions spiked more than 50 percent since 1997, according to the studies that have been carried out.

Fish, seabirds, sea turtles, and marine mammals become entangled in or ingest plastic debris, causing suffocation, starvation, and drowning as is demonstrated by the ship on fire. Plastic waste kills up to a million seabirds a year. As with sea turtles, when seabirds ingest plastic, it takes up room in their stomachs, sometimes causing starvation. The cost of ignoring this issue would be catastrophic to both communities on the beach and the marine life that depend on the coastal areas for their very survival. The trend must be reversed and brought under some semblance of control before it is too late affecting our beaches, the recreational areas, and crucially, disrupting the lives of the maritime populations.

The current webinar is the 19th of a series of virtual zoom panel discussions hosted by the America Sri Lanka Photographic Art Society in Los Angeles California, USA (ASPAS); Member of Photographic Society of America (PSA) and The International Federation of Photography of Art in France (FIAP). The objective of the series is to showcase the beauty of world fauna and flora and promote environmental conservation in the context of nature photography and tourism, with a special focus on the grandeur of Sri Lanka’s natural habitat. The webinar will be moderated by Medini Ratnayake.

Join the Webinar on the 6th of June Sunday at 8.30 P.M. for an exhilarating experience by going live to: https://www.facebook.com/aspaslausa/live/ 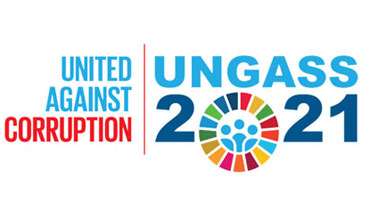 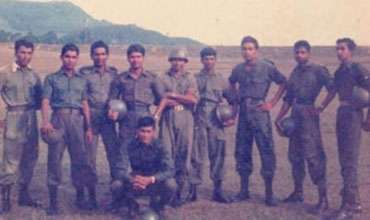 A day like this 35 years ago INTAKE 20 was Commissioned 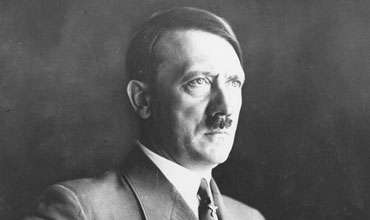 Adolf Hitler the racist, murderer of innocent men, women & children and, perhaps the most despised criminal 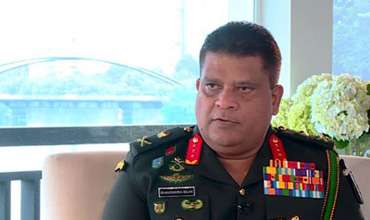